One of our granddaughters came for a 'slumber party' this past week. The older the grandchildren become the more of a challenge I have in finding things to entertain them. They are pretty good at keeping themselves busy but I always like to have some ideas up my sleeve just in case.

This visit was a bit more challenging because of our financial situation and small living quarters.

This was our itinerary. :-) 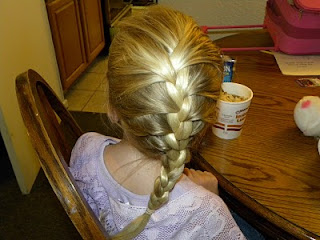 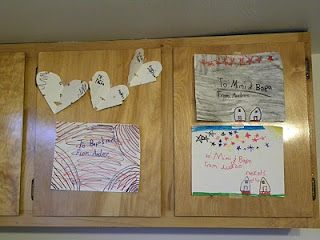 I often tell my husband when we go to the library on Saturday's that there is an 'underground world' that the rich (by the world's standards) know nothing about.

Miss A. had a wonderful time (her words not mine) and all was accomplished for very little money.

Posted by A Woman that Fears the Lord at 8:52 PM 5 comments:

Quick Tip: I read once in The Tightwad Gazette to change the way you think about every bag that comes through your door for the possibility of re-use. I keep a paper towel roll (the inside of the roll)  in my baggie drawer to keep them wrapped around with a rubber band holding them in place. I re-use baggies/bags that I place my fruits and vegetables in, bread wrappers and I even consider bags that are not food related. I wash and dry them of course. But, I NEVER use bags that had meat,egg or cheese items.

I rarely buy plastic freezer bags or baggies any longer and if I do I pick them up at the dollar store.

Georgene
Posted by A Woman that Fears the Lord at 9:11 AM 4 comments:

One of the greatest helps to stretching my food budget is 'stacking coupons'. Here is how it plays out..

The majority of stores will allow you to 'stack' a manufacturer coupon with a store coupon. This will give you the lowest price on an item. I watch for these kinds of deals (I'll share about BOGO free deals later). My weekly grocery list is mostly made up of items that I can find at their lowest price with the combination of coupons with sales. I'll buy multiple items to stock my pantry until the next sale.

Here is a scenario that may help explain it clearer.

This week CVS had a coupon in their flyer for Van Camp's Pork & Beans @ 2/ $1.00. I also saw that some counties offered a coupon in the Smart Source coupon booklet on 5/16  for this item (ours did not). So, you could use the CVS's coupon and also use the coupon from Smart Source for the same item. This way you get the product at the very lowest price so it's wise to stock up your pantry. Normally, I will try and set aside at least $10.00 for extra good deals.

Walgreen's has a monthly coupon book that they publish. It's at the front of the store with the weekly sale  flyer. You can also stack these coupons with the flyer sale AND a manufacturer coupon to get a great deal.

This is one way I end up with free items or close to free items.

I subscribe to quite a few blogs  that share weekly scenario deals from CVS, Walgreens, Target, Rite Aid and Walmart. I'll share those with you another day. I eventually want to have those links permanently placed on the sidebar.

I hope I explained this clearly.  It's fun to come home with bags full of free or nearly free items.

Poster used with permission
Posted by A Woman that Fears the Lord at 10:17 PM No comments:

I cringe when I think back at how much I used to spend on food after our children were grown and gone. Of course, we generally had one of their families living on our property with grandchildren in and out so that accounted for a small portion of my food budget. Plus, we did a lot more entertaining because we were in a large home. Still... I know I wasted a lot of money! I made a shopping list and off I went with no budget in mind. I spent anywhere from $600 up a month.
This season of life is different and it's essential (if I want to not work outside my home more than 2 days a week) that I keep on a strict budget. My husband's state disability check will stop in October and we'll be living off our savings until he is approved for permanent disability. Every penny MUST BE STRETCHED & PINCHED! 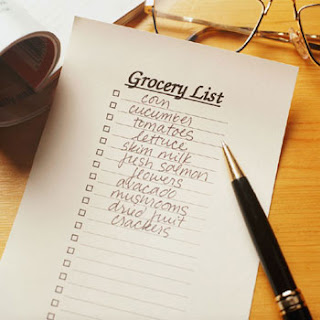 Last month I dropped our food bill from $400 to $300. I clipped a small piece of paper to my checkbook register and every time I made a purchase I wrote it on the piece of paper and kept a running total. It was a great way to start keeping track of what I was spending but I ended up running out of money before the end of the month.

My goal for June is to drop our grocery budget to $200. I'm going to try the envelope method this month and see how that works. My goal is to take out $50 a week and put $40 in an envelope for shopping. The other $10 will be set aside in case I need an item towards the end of the week. I tried this method last week and it worked perfectly with $10.00 left over.

I'll write tomorrow what my approach to shopping has been this past year and how it's helping me save a ton of money. I believe it's well worth my time to learn how to stretch the income we already have rather than trying to find new ways to earn more money. I consider it a part-time job that I get to do from home.

Georgene
Posted by A Woman that Fears the Lord at 4:46 PM 6 comments:

The purpose of this blog is to share an unusual journey...

Our lifestyle has changed pretty drastically the past several years. I'm sure we're not alone. The 'Great Recession' has impacted many households. Our household is one of them. Providentially we've been forced into a situation which is taking every skill we've ever learned in stretching our income. We're learning new lessons daily.

This is our story..

Approximately four years ago our trucking business was booming. We were like many people.. we had lots of work and made a lot of money.. and unfortunately we spent a lot of money, too! As our business grew we slowly began outgrowing the property we lived on so we made a decision to move to a larger piece of land.

A year after we moved the price of fuel went up along with insurance rates. A few of the larger companies we worked for began to pay later and later. Then, as the housing market began to fall, work became less and less. Each month we went farther and farther into the hole. We tried to keep the business afloat but after 1 year we finally had to make the decision to close our doors.

My husband went to work for another company pulling their trailer and we started to sell off our equipment. Our income dropped considerably and we were not sure we'd be able to keep our home so we put it up for sale. Kevin worked long, long hours and we kept our head above water. We had multiple offers on our property but they all fell through. We finally were able to sell a year and a half later but by that time we had lost 3/4 of the equity from our previous home. We moved into town and purchased a lovely home nearly half the size of the previous one. We thought things were settling down.

A few months after moving my husband's job came to an end. There was just no work. Within a few weeks my son offered him a job where he worked. It would be another cut in pay. We were sure there was no way we would be able to make it financially on the new salary but we took the job knowing we were blessed to have work. By then the housing market had dropped even more and the unemployment rate was high. We cut every expense we could and made it through another year.

We had no way of knowing that this job would be the end of my husband's career and put a heavy toll on his health. Over the coming months the physical nature of the job began playing havoc with the arthritis in his back. He was in excruciating pain which effected every area of his life. Nearly a year later my husband was laid off from this job due to limitations caused by his health and it was then he decided to file for disability.

We sold our home and ended up losing our rental home (which we had hoped to help fund us through our retirement years) and moved into a studio apartment in my aunt's barn that was smaller than our previous garage.

So.. that's our story... but it doesn't really end there. It's only the beginning. We're learning many new lessons. Some lessons are hard... but many of these lessons are bringing new joys as we discover that the simple things in life really bring the greatest joy.

This blog is dedicated to those who are facing hard financial challenges. It may be the working mother who wants to be home with her children but sees no way she can obtain that goal.. or the couple who desperately wants to retire but don't believe they can live on social security... or it may be the couple who need to dig their way out of debt by finding ways to cut back on their monthly expenses. I hope that this blog will give you the encouragement and necessary tools you need to thrive on LIVING WITH LESS MONEY.
Posted by A Woman that Fears the Lord at 8:32 PM 19 comments: