Frugal Friday: How I saved money this week!

Fall is in the air which has me thinking how I can prepare our home for the winter months. I know I  have an electric blanket that needs washing but I keep putting off going to the laundry mat. I've pulled out the slippers and located the sweaters and I need to bring the kerosene in from the garage to have it handy. I keep flash lights in most rooms so the batteries need to be tested.

This will be the first year in our new home. Since the house was built in 1917 I'm thinking it may be a bit drafty. We do not have central heat but there is a wall furnace in the living room. We were told by the grandson of the owners that it efficiently heats the entire house. I hope so. If not then I'm sure a couple of layers of clothes will do the trick. I don't mind the cold nearly as much as the heat. 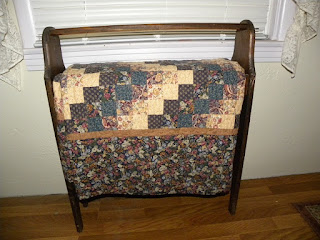 I've listed a few ways I saved money this week:

1. I've been saving leftover bits of veggies for a few months. I put them in a small marked container in the freezer. This week I dumped the container into a pot of hamburger soup. I was able to avoid using a can of veggies because of this practice. These were small amounts I would have just thrown away.  I also had frozen a container of unused tomato sauce that I threw in, too.

2. Homemade ice cream can be expensive to make. An older lady once shared a trick that helps keep the cost low which is to drain the water from the ice and salt and use it in the second batch. This also helps reduce the amount of salt needed for the second batch.  My friend also used to freeze water in milk jugs and then crush the ice with a hammer. I  have never been able to get the chunks small enough that they wouldn't jam as it's turning.

3.  I use seran wrap for my waffles when I freeze them. I reused the seran wrap after the waffles are eaten for the next batch. I also saved and washed a brown sugar bag and a piece of tinfoil to reuse.

4.  I had purchased some carrots with jalapenos and onions that I thought would go well with a mexican meal. They didn't. There was too much vinegar and no one cared for them. I froze them in small amounts thinking I could use them in future soups. Well, I tried a small amount in the pot of hamburger soup and my husband did not care for it at all. I'll need to come up with another idea to prevent throwing them away. Maybe I'll try to rinse them first.

5.  My husband enjoys a cup of Earl Grey Tea in the morning when it's chilly. I've been saving the tea bags by putting them in a container I keep in the fridge. Once I've gathered quite a few I will then use 3 used bags for a new cup of tea. I let it sit just a bit longer than the first use. My husband has never complained that it's too weak.

7.  I saved an empty peanut butter jar. I use empty jars for all types of things. One thing I use it for is to contain grease so I don't have to put it down the drain. I also use jars for compost items because the lid helps deter gnats and odor.

8.  Two clothes lines were hung in my laundry room for rainy days. I may have a chance to try them out this week.

9. I bought a few $1 Popsicle holders. We like sugar free Popsicles but the price is hefty so I'm trying to find a way to cut back on that expense. I use natural stevia in place of sugar. I did not like the way the Popsicle holders worked so I'll be on the hunt for an inexpensive set that is easy to use.

That's it for this week. How did you save money in your home?

Posted by A Woman that Fears the Lord at 8:25 PM