A Free Pumpkin and a little work

My sister blessed me with a HUGE beautiful pumpkin. It's been years since I cooked a pumpkin but I had hoped I would be able to find one this year since it would help stretch my grocery budget. Thank you, Lord!

I had read that you should not pressure can pumpkin that had been pureed so I decided to freeze most of the pumpkin in 2 cup servings. I have about 1/4 of the pumpkin left and I hope to pressure can it in chunks tomorrow. I'll use it in soups this winter. 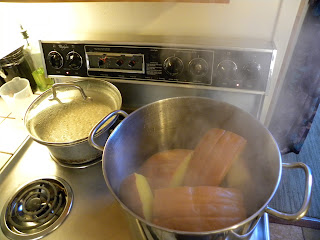 I scraped out the seeds inside the pumpkin with a large spoon making sure it was nice and clean with no strings. I placed the seeds in a strainer to clean. I cut the pumpkin in large pieces and then placed them in my tallest pot. I filled the pot with water about 1/4 of the way full and steamed the pumpkin until I cook easily pierce it with a fork. It took at least 30 minutes of steaming with the lid on.

Once it cooled I used a cheese slicer to peel off the skin. I cut the pumpkin flesh into chunks and pureed them in my food processor. I had to add a little bit of water to get the pumpkin moving in the processor. Once it cooled I scooped out 2 cups and poured it into a small baggie. I ended up with 6 bags (one of which I gave to my aunt). 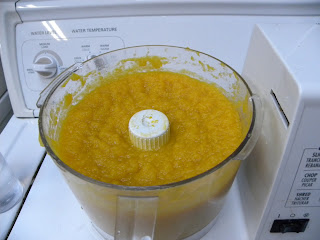 I followed Crystal's suggestions on processing the seeds and they turned out perfect. I cleaned the seeds well removing all the pulp and then placed them in a large pot. For every 1/2 cup of seeds Crystal said to add 1 tablespoon of salt and 2 cups of water. I boiled the seeds in the salt water for about 10 minutes and then drained in a colander. 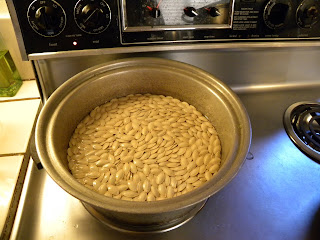 I poured olive oil in the corner of a cookie sheet and then placed the seeds onto the tray coating them with oil. I baked them at 400 degrees until they were brown. I stirred them a couple of times. 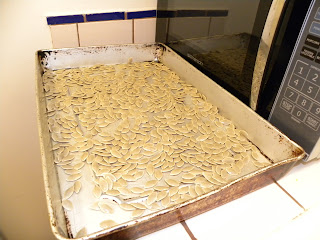 The picture above was taken before I baked them so they had not browned yet. They turned out great!!

Posted by A Woman that Fears the Lord at 8:08 PM