A little this and that...

My honey is on the mend from his cold (still coughing) and it looks like I won't be escaping the nasty little bug. So, I tried to take it easy the past few days. Our church is having our Sunday service at the river for baptisms. We'll have a pot blessing after service. I'm so hoping I will be well by then.
So.. let's see.. what did I do today? In between resting and coughing I roasted the Poblano peppers from our garden. I used some for Chile Rellenos. Since I wasn't feeling well I did the Rellenos in stages. I don't have a dishwasher so I roasted the chile's early and washed those dishes. Then a few hours later I peeled the skins off of them. Then later I made the sauce and washed those dishes. That left with me with just a few skillets and our plates and silverware after dinner. I wasn't up to washing a sink full of dishes. The older I get the easier it is to work in stages. I find it much easier to break big jobs down into smaller portions.

Our garden is in full production. Yesterday (in between coughing spells) I canned 8 quarts of apples.  Last week (did I already tell you this?) I pressure canned a batch of homemade tomato sauce and another batch of whole tomatoes plus one pint of pickled beets and a batch of salsa.  I'm growing the wrong kind of tomatoes for canning. I should be growing Roma's. If we are still living here next summer then I'll plant Roma's (Lord willing).  I've made several huge batches of salsa and still have tomatoes coming out our ears. I think I'll make some spaghetti sauce next and use it with the zucchini. 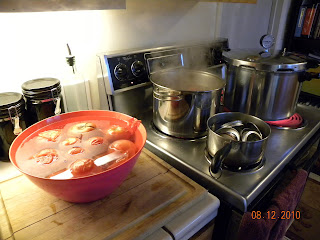 I spent some time gathering scriptures on a biblical communication and a wife's tongue for a friend and then rested while listening to Hinds Feet on High Places.
All in all it was a very nice day!

Posted by A Woman that Fears the Lord at 9:32 PM